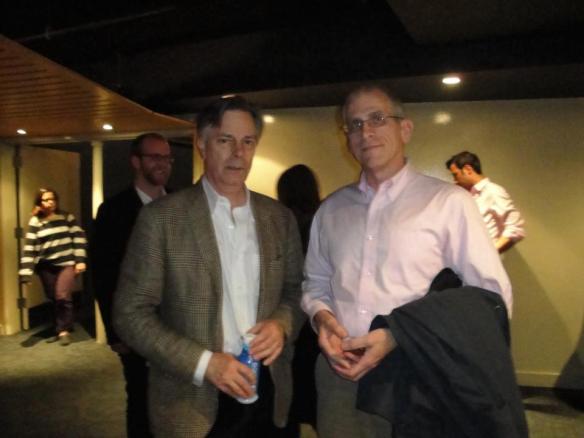 Going through my digital photo archive, I found a shot of me with director Whit Stillman (left) last May at the Landmark Sunshine Cinema in New York City.  Whit was there for a screening of his most recent film, “Damsels in Distress,” and a Q&A session with two of the actors in that film, Ryan Metcalf and Carrie MacLemore.  This was one of the last films I saw in the city before moving to South Carolina.

After the Q&A, Whit stopped to chat with me for a while.  He is one of my favorite directors, and has been known to indie filmgoers since the 90s as a chronicler of the “urban haute bourgeoisie.”  Though his films lack a precise time or place, they do seem to capture the decline of mainline families, whose values and relationships seem hopelessly old fashioned, and an evolving and complicated set of social standards.  His previous films Metropolitan, Barcelona and The Last Days of Disco have been referred to as somewhat of a preppy trilogy.  Metropolitan (1990) remains my favorite of his films.

The Last Days of Disco (1998) features an impressive Madras plaid sport coat worn by Chris Eigeman, who plays Des.  Eigeman strenuously objected to being asked to wear the Madras jacket, but Whit won the debate. 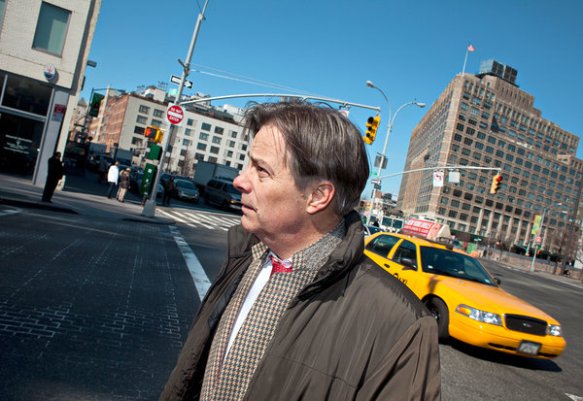 Looking more like a wayward preppy trying to get into the Harvard Club without a tie than a legendary indie filmmaker mounting a comeback, Whit Stillman limped up to a RED digital camera and peered at a set dressed to resemble a girl’s dorm at a coed liberal arts college. This was back in October 2010. Since the start of the month, Stillman had been leaving his Manhattan sublet before sunrise and commuting to Staten Island, where, amid the banana trees and Greek Revival architecture of the Snug Harbor Cultural Center and Botanical Garden, he was shooting “Damsels in Distress,” his first movie in 12 years. Dressed in khakis, a white shirt and a blue blazer, Stillman was in some distress himself, having strained the plantar fascia of his right foot running in loafers for a subway train. He would be 59 in January — more than twice the age of most of his cast and crew — and given his perfectionist tendencies in the editing room, he would surely be 60 by the time the movie was released. “I don’t like to say I’m pushing 60,” he said. “I prefer to say I’m pulling 59.”

Satisfied with the setup, Stillman limped back to the monitor and slipped on a pair of headphones.

“Damsels in Distress” follows four college girls, Heather, Lily, Rose and Violet, as they grapple with problems ranging from love troubles to toxic frat-house odors and suicide attempts by education majors who insist on throwing themselves off two-story buildings. (“If they can’t even destroy themselves, how are they going to teach America’s youth?” Rose asks.) The students at Seven Oaks, the fictional college, have a lot in common with the preppies and patricians of “Metropolitan” (1990), “Barcelona” (1994) and “The Last Days of Disco” (1998), the autobiographical trilogy that prompted reviewers to call Stillman “the WASP Woody Allen” and “the Dickens of people with too much inner life.” They grope for direction but are seldom lost for words, and beneath their barmy crotchets and pretentious dissertations there’s heartache and yearning. Stillman is the knight-errant of sneered-at bourgeois values. He extols the overlooked merits of convention and the hidden virtues of the status quo. Inveighing against “cool people” and the social cachet of “uniqueness, eccentricity, independence,” the transfer student Lily asks: “Does the world really want or need more of such traits? Aren’t such people usually terrible pains in the neck? What the world needs to work properly is a large mass of normal people — I’d like to be one those.”

Even the frat-house dolts who provide a counterweight of broad comedy — the character Thor can’t identify colors because he skipped kindergarten — aren’t belittled for their simple-minded aspirations. What Stillman captures best are people who aren’t quite adults but are no longer children: bewildered fledglings of beleaguered traditions who have a mostly abstract grasp of suffering, an often-preposterous belief in their own moral integrity and an optimistic faith that their destiny is part of a divine plan — ideally one of God’s.

Stillman watched as Scene 24 unfolded on the monitor. The film’s main character, Violet, played by the lauded young star Greta Gerwig, was defending a guy at a bar who’d sent drinks over to Lily and another student.

“He was probably just yearning for some intelligent discourse,” Gerwig said. “He could see that Alice and Lily are college students. College students are well known for their interesting conversation. After all, they can talk about their courses. That’s probably what attracted him — ”

“Nonsense,” said Megalyn Echikunwoke, who was playing Rose with a fluty British accent.

“His aspirations were perhaps even loftier — to court Lily, with a view to matrimony. We’re in the North, but occasionally a Southern gentleman will wander into these parts.”

When the scene finished, Stillman said: “That’s really great. Can we do it again?” He asked Echikunwoke: “Can you do a ‘nonsense’ with more oomph? More like your ‘rubbish.’ ”

On the brink of action, Stillman spotted a hair malfunction on one of the actresses and sprang up to fix it, plantar fascia be damned. He began to plump one of the bunk-bed duvets. That glare on the top bunk — could someone black it out with a Sharpie please? And then he took after a fly on the set, trying to bat it out of the scene with some wild forehands. He limped back to the monitor, shaking his head.

“Chasing flies, fixing hair — I think I’m showing off,” he confessed. “Normally on my movies there’s no direction at all.” 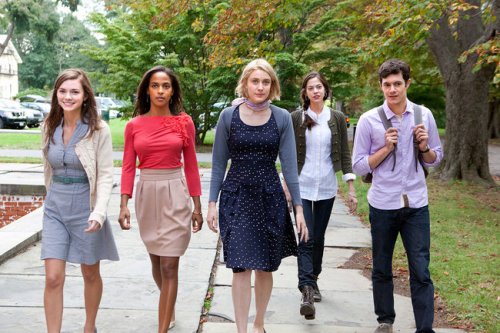 Film Still from Damsels in Distress

Nothing could be further from the truth, of course, but wry self-deprecation is one of the hallmarks of the well-bred WASP, and Stillman is a museum-quality specimen. Which you might expect of a man whose godfather, the sociology professor E. Digby Baltzell, always gets credit (inaccurately) for coining the term “WASP.” Even in unbuttoned Los Angeles, Stillman adheres to the preppy uniform of loafers, jacket and tie. He speaks briskly, carbonating his conversation with the same daft esoterica that bubbles up in his scripts — everything from the influence of Scrooge McDuck (“the only true role model for kids in rich families”) to the sexual practices of medieval French heretics known as Cathars.

“I think Whit is painfully sincere and open about stuff most people aren’t,” says Chris Eigeman, who starred in Stillman’s first three movies and is more closely identified with his work than any other actor. “When ‘Metropolitan’ came out, all the principals went to the Cannes Film Festival. We were all sitting in a French restaurant, and the waiter was really making Whit uncomfortable. I was dying trying not to laugh, and he looked over at me and said, ‘It’s O.K. to laugh at me.’ ”

Stillman remains as adept at confounding expectations as he was in 1969, when, a Harvard freshman, he escorted a debutante to the Junior Assemblies ball at the Plaza Hotel in New York with a Students for a Democratic Society button tucked under the lapel of his white-tie-and-tails. His preferred place to write is Dunkin’ Donuts. He says he has no assets but finds having no assets to be “pathologically exhilarating.” His having no assets is, in and of itself, confounding given his lineage of prosperous sea captains, merchants and bankers, including his great-grandfather James Jewett Stillman, the president of National City Bank and one of the richest men in America when he died in 1918. The legacy left to John Whitney Stillman of Generation 10 was old-money culture minus the old money. Plus some inside material about the Stillman clan he used for his Harvard thesis, “Ten Families,” on the lack of dynastic control in American family-run companies.

“Metropolitan” and “Barcelona” earned nice profits, but “The Last Days of Disco” lost a bundle. And yet you get the impression Stillman could live with “Damsels in Distress” languishing at the box office (the movie opens in New York on April 6) if the trade-off was that the “sambola,” which he and the choreographer Justin Cern created to fulfill Violet’s dream of starting an international dance craze, actually became an international dance craze.

With his eccentric view of eccentricity, Whit Stillman resembles nothing so much as a character from a Whit Stillman film. He is the cast member who is obsessed with social codes and clichés, who covers hurt and hard feelings with a wicked wit. He may not, like so many of his characters, proclaim eternal devotion to principles he betrays 20 minutes later, but he does change his mind a lot and can be hard to pin down vis-à-vis deadlines and field trips proposed by journalists. He is a creature of comic contingencies and contradictions, not the least being that when he’s writing, he craves the society of the film set, and when he’s behind the camera, he covets the countertop at Dunkin’ Donuts.

To continue reading, follow this link to Whit Stillman and the Song of the Preppy in The New York Times. 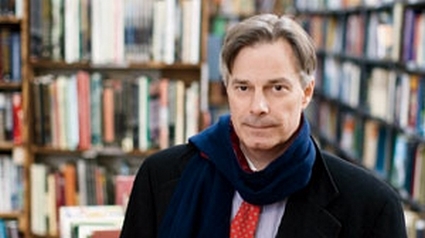