Of note to all bargain hunters:  while not quite as satisfying as a good thrift find, you can get 70% off selected merchandise at J. Press in honor of their move to a new New York City flagship store.  This is good if you live in the city, or within a reasonable drive, as items cannot be purchased online.  Having left NYC last year, I regret that I can’t explore what’s available in the sale.  The J. Press store was on the same block as my wife’s office.  I passed by there just about every day on the way to Grand Central.

One of the most practical and usable accessories to have in the wardrobe is a grosgrain ribbon watch band.  These three from J. Press are the ones that I use most often. Top to bottom:  red and navy stripe, blue white and red stripe (reversible  to a red,white and navy side) and a solid light blue band.  The latter actually gets the most wear, as it will go with almost any clothing combination.

J. Press grosgrain watch bands retail for $18.00 to $29.00, but they currently have a 40% off sale.  As much as I’d like to find these in a thrift store, it’s nearly impossible.  So I wait for a good sale to buy the ones I want at a discount.  Maybe it’s a lot of fuss over what will support a very cheap Timex with a visibly scratched face, but I’m just quirky that way.

For more about the place of grosgrain ribbon watch bands in preppy culture (and their recent resurgence in men’s fashion), check out Ivy Style. 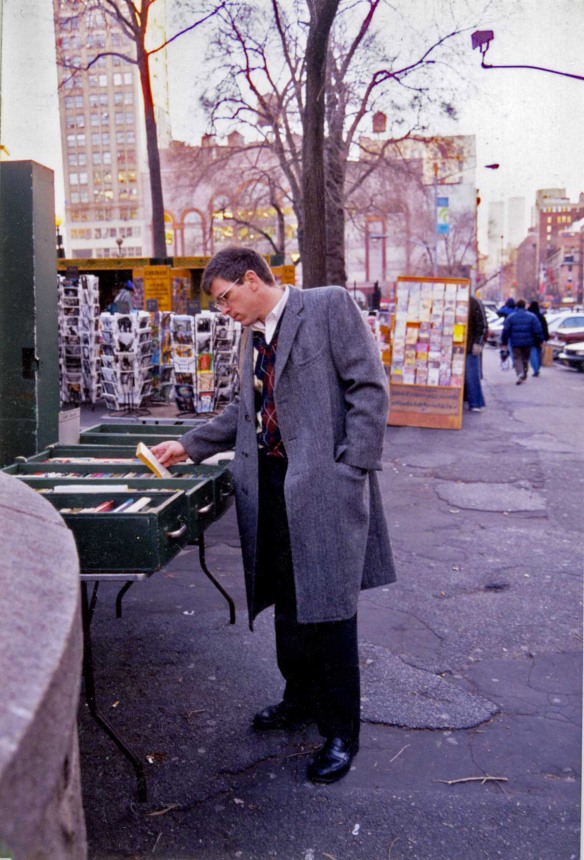 My wife took this photo of me looking at books among the vendors at Union Square near 17th Street in New York City.  As best I can recall, this was taken around December of 1997.  We had been in the city nearly a year, having moved up from South Carolina, and I was working for MoMA.

Union Square was a seven minute subway ride on the L Train from the Bedford Avenue stop in our neighborhood:  Williamsburg, Brooklyn.  The World Trade Towers are visible to the right, just beyond the pedestrians.  Washington Square Park was a short walk south down University Place in the direction of the towers.

My sartorial style was largely out of synch with the burgeoning hipster population of Williamsburg, but drew respect from our old school Italian neighbors.  In this photo, I was wearing charcoal gray wool flannel pants, a button down shirt, a wool argyle sweater (non-thrifted Christmas gift) from Brooks Brothers, a wool herringbone pattern topcoat and a pair of black Bass Weejuns.  The glasses were tortoise rim.

I’m not sure whether to love or hate the fact that hipsters have appropriated (maybe hijacked is a better word) the preppy look in the last few years.  They are certainly dressing better.  I suppose that is a good thing.  So I won’t complain too much about their “preppy with a twist” aesthetic.  How ironic!  When walking down Bedford Avenue once in the late 90s in khakis, a ribbon belt and a pink button down, I felt as though I was doing a perp walk based on the scornful looks I received.  That preppy has been embraced by the same kind of people proves good taste never really goes out of style, even if for them it is a fad.  You can read more about hipsters on Free Williamsburg.  (Note:  after I made this post, I found this related article published in The New York Times:  “How I Became a Hipster.”

On the same day as the Union Square photo, my wife and I went uptown to see a Broadway show at the Neil Simon Theatre.  I can’t remember which show it was.  Maybe I can track that down by going through some old playbills.  A Christmas tree is visible on the balcony above the Russian Samovar restaurant next door to the theatre. 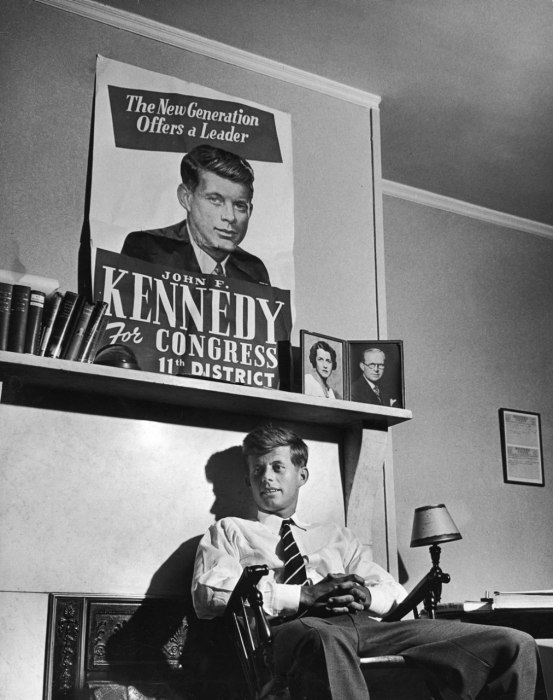 John Fitzgerald Kennedy’s first political campaign came in 1946 when he ran for Congress in the 11th District of Massachusetts.  He was 28 years old, a graduate of Harvard University and a veteran of WWII, having served as a PT Boat commander in the Pacific Theatre.  He was recognized for heroism, helping to save his crew members after being rammed by a Japanese destroyer.

Kennedy is shown here relaxing in a chair below one of his campaign posters.  Photographs of his mom, Rose, and his father, Joseph, are on the mantle.  He is wearing a white shirt with a rep tie and gray flannel pants.  When inaugurated as President of the United States in 1961, Kennedy brought a dramatic improvement in style to the White House.