In his book Class:  A Guide Through The American Status System, cultural critic Paul Fussell presents a concise analysis of ties and their class significance in America.  I am posting the text of that passage in its entirety along with representative images of each type of tie he discusses.

The principle that clothing moves lower in status the more legible it becomes applies to neckties with a vengeance.  The ties worn by the top classes eschew the more obvious forms of verbal and even too crudely symbolic statement, relying on stripes, amoeba-like foulard blobs, or even small dots to make the point that the wearer possesses too much class to care to specify right out in front what it’s based on.  (This illustrates the privacy principle, or the principle of mind-your-own -little-disgusting-middle-class-business, a customary element of the aristocratic stance.)

Small white dots against a dark background, perhaps the most conservative tie possible, are favored by the uppers and upper-middles and,  defensively, by those nervous about being thought low, coarse, drunken or cynical, like journalists and TV news readers and sportscasters, and by those whose fiduciary honor must be thought beyond question, like the trust officers working for the better metropolitan banks.

Moving down [in class ] from stripes, blobs, or dots, we come to necktie patterns with a more overt and precise semiotic function.  Some, designed to announce that the upper-middle-class wearer is a sport, will display diagonal patters of little flying pheasants, or small yachts, signal flags and sextants.  (“I hunt and own a yacht.  Me rich and sporty!”)

Just below these are the “milieu” patterns, designed to celebrate the profession of the wearer and to congratulate him on having so fine a profession.  These are worn by insecure members of the upper-middle class (like surgeons) or by members of the middle class aspiring to upper-middle class status (like accountants).  Thus a tie covered with tiny caduceuses proclaims “Hot damn!  I am a physician!”  (Significantly, there is no milieu tie pattern for dentists).  Little scales signify “I am a lawyer.”  Musical notes:  “I have something to do with music.”   Dollar signs or money bags:  a stockbroker, banker, perhaps a wildly successful plastic surgeon, or a lottery winner.

I’ve even seen one tie with a pattern of little jeeps, whose meaning I’ve found baffling, for surely if you were a driver in any of our wars you’d not be likely to announce it.  Other self-congratulatory patterns like little whales or dolphins or seals suggest that you love nature and spend a lot of time protecting it and are thus a fine person.

Any of these milieu ties can be alternated with the “silk rep” model striped with the presumed colors of British (never, never German, French, Italian, Potuguese or White Russian) regiments, clubs or universities.

As we move further down the class hierarchy, actual words begin to appear on ties, and these are meant to be commented on by viewers.  One such artifact is the Grandfather’s Tie in dark blue with grandchildren’s names hand-painted on it, diagonally, in white.  Imagine the conversations that ensue when you wear it!  Another reads “I’d rather be sailing,” “skiing,” etc., and these can also be effective underminers of privacy – “conversation starters,” and thus useful adjuncts to comfy middle-class status, in the tradition of expecting neighbors to drop in without warning.

Some ties down in this stratum affect great cleverness, reading “Thank God It’s Friday” or “Oh Hell, It’s Monday”; and a way to get a chuckle out of your audience  and at the same time raise your class a bit is to have these sentiments abbreviated  on your tie with yachting signal flags.  At the bottom of the middle class, just before it turns to high prole, we encounter ties depicting large flowers in brilliant colors, or simply bright “artistic” splotches.  The message is frequently “I’m a merry dog.”  These wearers are the ones [John T.] Molloy is addressing when, discussing neckties, he warns “Avoid purple under all circumstances.” 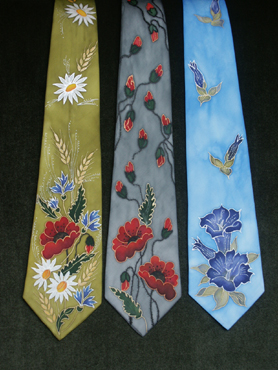 Further down still, where questions of yacht ownership or merry doghood are too preposterous to be claimed even on a necktie we come upon the high- or mid-prole “bola” tie, a woven or leather thong with a slide (often of turquoise or silver), affected largely by retired persons residing in Sun Belt places like New Mexico. 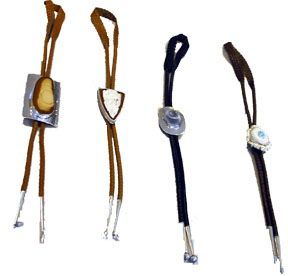 Like any other sort of tie, this one makes a statement, saying, “Despite appearances, I’m really as good as you are, and my necktie, though perhaps unconventional, is really better than your traditional tie because it suggests the primitive and therefore unpretentious, pure and virtuous.”  Says the bola, “The person wearing me is a child of nature, even though actually eighty years old.”  Like many things bought by proles, these bola ties can be very expensive, especially when the slide is made of precious metal or displays “artwork.”

The point again is that the money, although important, is not always the most important criterion of class.  Below the bola wearers, at the very bottom, stand low proles, the destitute, and the bottom-out-of-sight, who never wear a tie, or wear one – and one is all they own – so rarely that the day is memorable for that reason.  Down here, the tie is an emblem of affectation and even effeminacy, and you can earn a reputation for being a la-di-da by appearing in one, as if you thought yourself better than other people.  One prole wife says of her spouse, “I’m going to bury my husband in a T-shirt if the undertaker will allow it.”

In his unmercifully accurate 1983 book Class:  A Guide Through The American Status System, Paul Fussell wrote about a fashion faux pas he regarded as a lower class signifier – the “prole jacket-gape.”

Here, the collar of the jacket separates itself from the collar of the shirt and backs off and up an inch or so:  the effect is that of a man coming apart.  That this caste mark is without specifically reactionary political meaning is confirmed by a photograph of Richard Hoggart, the British radical critic and Labor Party enthusiast, used to promote a recent book of his:  his jacket is gaping a full inch at the rear, ample indication that jacket gape afflicts the far left as well as the far right.  What it betrays, indeed, is less the zealot than the stooge.  Like the poor chap interviewed on TV recently by William F. Buckley.  He was from Texas and wanted to censor school textbooks to repress, among other evils, pro-miss-kitty.  (As gently as possible, Buckley corrected this mispronunciation of promiscuity so that the audience would know what the poor ass was talking about.)  But even if the Texan had not, with complete confidence in his unaided powers, delivered repeatedly this prole mispronunciation, his perceptiveness and sensibility could have been inferred from the way his jacket collar gaped open a full two inches.  Buckley’s collar, of course, clung tightly to his neck and shoulders, turn and bow and bob as he might.  And here I will reject all accusations that I am favoring the rich over the poor.  The distinction I’m pointing too is not one between the tailored clothes of the fortunate and the store clothes of the others, for if you try you can get a perfectly fitting suit collar off the rack, or at least have it altered to fit snugly.  The difference is in recognizing it as a class signal and not recognizing it as such.  You’ve got to know that, as Douglas Sutherland says in An English Gentleman, almost the most important criterion in a suit worth wearing at all is “that it should fit well around the shoulders.”

I have mentioned in my thrifting posts that it is possible to find many well-made jackets and suits from traditional clothiers, which makes the task of getting a correct fit much easier.  J. Press and Brooks Brothers, for example, make jackets and suits designed to fit  the natural slope of one’s shoulders and come without excessive padding.  You must know your correct size, a point I will cover in more detail in another post.  It is very important to have a reliable tailor, who can adjust the fit and lower the collar, if necessary.  If you follow these principles, you will never suffer prole jacket gape.

Class:  A Guide Through The American Status System, by Paul Fussell.  This witty and spot on analysis of class distinctions among Americans was originally published by Touchstone in 1983.  Alison Lurie of The New York Times Book Review wrote, “A shrewd and entertaining commentary on American mores today.  Fascinatingly accurate.”