I’ve listed Hampden-Sydney again this year as the most preppy college in the South.  It was founded in 1775, when George III was King of England, Virginia was a British colony and the Declaration of Independence was yet to be written.  One of only four all-male colleges remaining in the United States, Hampden-Sydney counts Patrick Henry and James Madison as two of its original Board of Trustees members.

Students at Hampden-Sydney take a great deal of pride in their appearance and believe in good manners.  In fact, the school has published its own etiquette guide:  To Manor Born, To Manners Bred (now in its 7th edition), which has been updated for the social media age.  That’s serious dedication!  Some gentlemen of Phi Gamma Delta fraternity above display a range of attire:  plain front khakis, blue blazers, a navy suit with a Brooks Brothers repp tie, freshly pressed pinpoint and oxford cloth button downs, bow ties, ribbon belts with motifs and a needlepoint belt.  This is all standard dress on campus, and one of the reasons Hampden-Sydney is considered a very traditional college.

In the February 2013 issue of Town & Country, Hampden-Sydney alumni were featured tailgating on campus prior to a football game against arch rival Randolph Macon. All of these gentlemen are sporting bow ties, and one is wearing Nantucket Reds with a pair of go-to-hell socks that would make President George Herbert Walker Bush envious.  Tailgating was spoofed in Lisa Birnbach’s The Official Preppy Handbook (1980) in which she also listed Hampden-Sydney as the #3 preppy college in the country behind Babson (#1) and Hamilton (#2).

Also in The Official Preppy Handbook, noted both for its finely drawn satire and anthropological treatment of preppies, is a section on body types with representative photos and descriptions of each.  The Good Old Boy’s biography includes attending Lawrenceville and Hampden-Sydney, and his stated attributes suggest a fun-loving, if not bawdy, demeanor.  He is holding a “genetically attached beer can,” while wearing a button down layered over a Lacoste shirt (Southern collar notably not popped), rumpled, flood level khakis and a pair of penny loafers, one of which is duct taped to keep the sole and the upper together – a practice cultivated at Lawrenceville.  He’s the one of the three I think I’d most enjoy being around.

As an homage to Birnbach, whose publication became a national bestseller, the college’s Kaleidoscope yearbook staff responded with The Official Preppy Yearbook.

Birnbach visited Hamden-Sydney a few years ago to promote her most recent book, True Prep, in which she elevated the college’s sartorial place, writing,”… allow us to assure you, in no uncertain terms, that Hampden-Sydney is, without equivocation, the preppiest college in the United States.”  In fact, one enterprising student there, Samuel Thomas, recently co-founded a bow tie company called Dogwood Black (originally Southern Ties) and is now marketing his expanding product line nationally after getting requests from upscale men’s clothiers.

In addition to the classic madras bow tie shown above, Dogwood Black offers such unique items as a camo bow tie.  I think this qualifies as the Southern version of go-to-hell style, allowing  a wearer to go from duck blind to formal party without skipping a beat.  One quote on the company website functions as a philosophy about wearing one of their ties, “If you can handle being the center of attention.”

Hampden-Sydney has become more diverse in recent years, and with that change has come a difference in fashion sensibility on campus.  The look among some students retains the preppy style but is much more updated.  The gentleman on the right (below) looks as if he might be wearing a Dogwood Black Delta Chi fraternity bow tie, but I’m not positive.  The gentleman on the left seems more aligned with Unabashedly Prep, which I’ve heard described as “new wave prep” or as “preppy with a twist.”

Dr. Christopher B. Howard, Hampden-Sydney’s 24th president, is a graduate of the U.S. Air Force Academy.   This gentleman was a Rhodes Scholar at Oxford University, where he earned a Master of Philosophy and a Doctorate of Philosophy in Politics.  He also holds an MBA from Harvard Business School.  Howard is the first African-American president in the college’s history, and he is proudly a Brooks Brothers man.

In 2010, Hampden-Sydney entered into a formal partnership with Brooks Brothers to provide a 15% corporate membership discount to students, faculty and staff of the college.  The program is titled “Dressing for Success with Brooks Brothers.”  In this YouTube video, President Howard discusses the program and the investment in college education with parents of prospective students at an event hosted in a Brooks Brothers retail store in Richmond, VA.

Now in its third century of operation, Hampden-Sydney has a beautiful campus, an excellent academic reputation, a long tradition and a very loyal alumni base, many of whom contribute substantially to the institution every year.  Its past is distinguished, and its future looks secure. 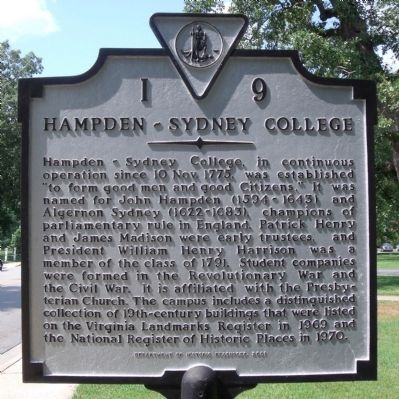 I am a fine art photographer, college professor, and virtual creative. View all posts by Bryan Hiott